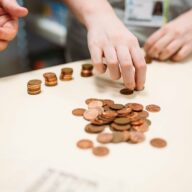 Philip moved from Tier 2 to Tier 3 in September 2019 and he had a challenging time getting familiar with the many changes to his college day.

Initially, Philip struggled with the new classes, which were a little busier than he was used to. However, working with staff it was agreed that Philip would join his old Tier 2 class first thing in the morning to ease into the college environment with old friends, and then start his Tier 3 lessons later with his new classmates.  This change gave Philip the chance to start the college day in a relaxed manner and increased his confidence.

There are many electives on offer at Bracknell & Wokingham College, including Motor Mechanics, Business Studies, Drama and Childcare. Philip chose Catering and joined a class of both familiar and new faces.

Named ‘The Tasty Tuesday Team’ by the students themselves, the class set up an enterprise project, offering a small menu of freshly prepared food that staff can order and have delivered to their desks on a Tuesday lunchtime.

Working in a busy, noisy environment, to strict deadlines, was a new concept to Philip but to see him in the kitchen now you would hardly believe it. He has had a chance to cook everything on the ever-evolving menu, including healthy sausage rolls, chicken pies, Christmas biscuits and hot cross buns.

He had a breakthrough in February 2020 when he started cleaning and tidying without being asked, which is a great skill for working in a professional kitchen!

Philip also enjoys challenging himself each week when the food is delivered. Exploring new places does not come easily to Philip, but he is determined to have a go and really pushes himself, which gains recognition from staff and students alike.

Philip has also made massive progress on his work experience. He started at the Entertainer with full support, as he found it very difficult to communicate with people he was unfamiliar with. He also found the busy shop floor overwhelming.

This support was gradually withdrawn over a six-week period until Philip was attending completely independently. The placement was so successful that he was invited back for another six weeks, which he attended fully independently! By the end of the placement, Philip was able to communicate with not only store colleagues but customers too.

Philip has since been working in the college’s Recharge cafe. His confidence and love of the job just shines through. He is always happy, engaged, chatting with colleagues and generally just loving his work! This is fantastic to see as he has had times where he has been very unhappy at college.

Philip has shown great courage, resilience and perseverance over the past two years and it’s really paid off for him